Zuma assured AU al-Bashir would not be arrested – Mugabe 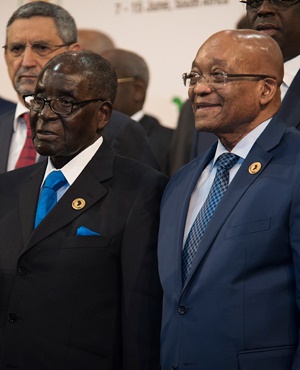 Responding to questions by journalists following the close of the AU summit in Sandton just before midnight on Monday, Mugabe said because Bashir was a wanted man, NGOs were going to court to try force his arrest.

Bashir is wanted by the International Criminal Court for war crimes and crimes against humanity.

“This is not the headquarters of the ICC and we do not want it in this region at all,” Mugabe said.

“There is a view that we must distance ourselves from the ICC, but unfortunately the treaty that set it up was done not by the AU, but by individual countries,” he said.

“But those who signed the treaty are now regretting. We didn’t sign it as Zimbabwe. We won’t subject ourselves to justice outside our country’s borders.”

He said NGOs were used by outsiders to go to court to force government to arrest Bashir, “because he is a wanted man by the ICC”.

Mugabe said in court “not all judges think like we do”, and they might dislike “freedom fighters” or the way things are done in a certain country, he said.

Summit ‘no different to others’

AU Commission chairperson Nkosazana Dlamini Zuma was a little less outspoken, saying the AU had nothing to say about Bashir’s attendance because it was within his rights to do so.

Dlamini-Zuma said various host countries signed agreements with the AU on the hosting of the summit. “This venue up to now,” she said with reference to the Sandton Convention Centre where the conference was held, “is an AU venue, it is not a South African venue,” she said.

“It may be located on the geographical space of South Africa, but is an AU venue.”

She added that the AU could not have “any real relationship” with the ICC because it wasn’t a state but a continental body.

Bashir on Monday slipped out of the country despite a court ordering that he should stay until the case by civil society about his arrest was heard. He left while these court proceedings were still in progress.