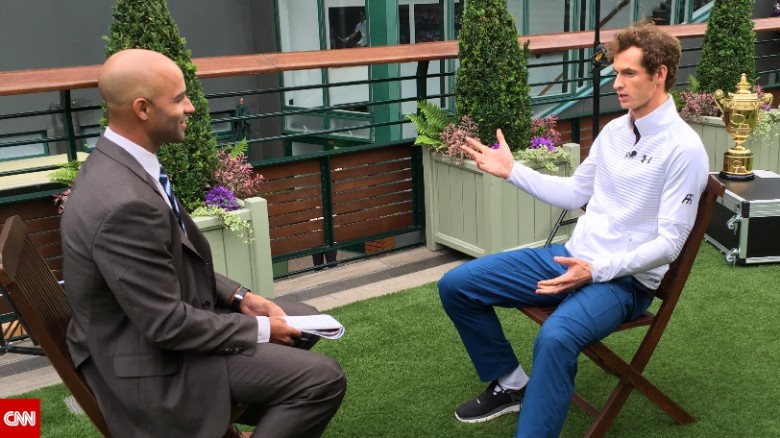 Wimbledon champ Andy Murray (right) spoke to CNN’s James Blake about the change of gun laws after the Dunblane massacre in 1996. Murray was in a nearby classroom during the shooting.

Wimbledon (CNN)Wimbledon champion Andy Murray has joined a host of athletes who are weighing in on gun violence following the recent troubling incidents in the U.S.

Five officers were shot dead in Dallas on Thursday at a rally protesting the police killings of two African Americans on successive days last week.
The events have reignited an ongoing debate about how to end gun violence in America, alongside topics related to civil rights and racial profiling.
Murray, from Dunblane, Scotland, happened to be an 8-year-old student at the scene of one of the deadliest mass shootings in British history. In March, 1996, 16 children and their teacher were shot dead by man who then killed himself. Murray and older brother Jamie were shielded in a nearby classroom, unaware of the killings until afterward.
The murderer, Thomas Hamilton, was a familiar face who ran a local boys’ club.
Debates following the disaster led to a change in gun policy in the UK, making it much more difficult for private citizens to own handguns. Murray hopes similar discussions will follow in the U.S.
“It’s shocking really. It’s just tough to watch, tough to read about,” he told CNN the morning after his second Wimbledon victory. “I was in the primary school in Dunblane when that happened, and since then they obviously brought in gun controls.”
There has been just one high-profile mass shooting in the 20 years since Dunblane — a 2010 incident in Cumbria, England which claimed 12 lives — although shooting sprees in the UK were not common beforehand.
In stark contrast, there have been 181 mass shootings in the U.S. so far this year following 332 in 2015, according to the Gun Violence Archive which defines a mass shooting as an event where four or more people other than the culprit are shot or killed.
“I don’t know what the answer is in the States, but I know that something needs to change because that can’t continue to happen.” he added. “When you see it happening to young children as well… being a father I can’t imagine how difficult it would be.
“You know you don’t have to take away all of the guns but change something to stop that from happening,” he said.
READ: Dunblane: How UK school massacre led to tighter gun control

New York Knicks All-Star forward Carmelo Anthony weighed on the Dallas massacre with a long Instagram post that accompanied a photo of black civil rights leaders of the 1960s sitting alongside prominent athletes of the day, Muhammad Ali and Kareem Abdul-Jabbar.
Anthony, who grew up around gun violence in a rough patch of Baltimore, called on today’s athletes to demand changes from within the political sphere.
“Our anger should be towards the system. If the system doesn’t change we will continue to turn on the TVs and see the same thing. We have to put the pressure on the people in charge in order to get this thing we call JUSTICE right. A march doesn’t work. We tried that. I’ve tried that. A couple social media post/tweet doesn’t work. We’ve all tried that. That didn’t work. Shooting 11 cops and killing 5 WILL NOT work,” he wrote.
“I’m calling for all my fellow ATHLETES to step up and take charge. Go to your local officials, leaders, congressman, assemblymen/assemblywoman and demand change. There’s NO more sitting back and being afraid of tackling and addressing political issues anymore…We can’t worry about what endorsements we gonna lose or whose going to look at us crazy.”
His friend and fellow U.S. Olympian LeBron James weighed in with his own tweet after Dallas, simply pleading for calm: “We are all hurting tonight. More violence is not the answer. #StoptheViolence.”
James previously took a stand against gun violence in 2012, following the shooting of unarmed teenager Trayvon Martin in Florida. The four-time league MVP posed for a photo with his Miami Heat teammates wearing black hoodies, in solidarity with the slain youth who was similarly dressed at the time of his killing.
He accompanied the photo with the tweet “#WeAreTrayvonMartin #Hoodies #Stereotyped #WeWantJustice”
James has not been averse to take political stances despite his huge endorsement deals, something athletes of past generations were not always comfortable with. James led a group of NBA stars who wore “I Can’t Breathe” T-shirts during warmups in 2014, following the controversial police killings of Eric Garner in New York and Michael Brown in Missouri.
Last year, the NBA took a proactive measure with a series of ads that featured Anthony alongside Chris Paul and league MVP Stephen Curry discussing their brushes with gun violence. Although the NBA clarified that it was not advocating for a policy change, the move was the first of its kind for a league of its stature and warranted an appreciative tweet from President Obama.
“I’m proud of the @NBA for taking a stand against gun violence. Sympathy for victims isn’t enough — change requires all of us speaking up,” he wrote.
In January, 2010 the NBA suspended Washington Wizards players Gilbert Arenas and Javaris Crittenton for the rest of the season following an altercation between the two revealing that each stored unloaded firearms in their lockers.
Arenas, whose career was on the line, apologized through an editorial in The Washington Post.
“Guns and violence are serious problems, not joking matters,” he wrote. “Professional athletes have a duty to act responsibly and to understand the influence we have on all those kids who look up to us. “
READ: U.S. home to nearly a third of world’s mass shootings

In April, the NFL was confronted with gun violence when one of its former players, Will Smith of the New Orleans Saints, was shot and killed following a minor traffic incident which also left his wife wounded. New Orleans has been plagued as one of the hardest cities hit by gun crime over the years.
“I hate guns,” Saints head coach Sean Payton said to USA Today after the incident which took place only eight blocks from his house in the upscale Garden District. “I’ve heard people argue that everyone needs a gun. That’s madness.”
“There are places like England where cops don’t even have guns,” he added. “If this opinion in Louisiana is super unpopular so be it. Two hundred years from now, they are going to look back and say, ‘What was this madness about?'”
Sadly, Smith’s death followed other harrowing gun-related incidents for the league. In 2012 Kansas City Chiefs linebacker Jovan Belcher shot and killed the mother of his child before killing himself in the Chiefs’ parking lot the morning of a game. Belcher owned a number of guns, and had purchased them legally, according to USA Today.
In 2007 Washington Redskins safety Sean Taylor died after being shot during a burglary in his Florida home.
READ: New Orleans violence ‘beyond the pale of reason and sanity’