His 33rd goal in 38 games helped ensure Borussia Dortmund will take a 3-0 advantage into the second leg of its Europa League last-16 tie against Tottenham next week after the German side blew its opposition away with a typically high octane performance.

Marco Reus added two of his own to Aubameyang’s strike as Tottenham, still in with a chance of winning its first domestic league title for the first time in 55 years, was soundly beaten.

At 26, Aubameyang is hardly new to football fans but his impressive run of form, which has helped Dortmund move to within five points of Bayern Munich at the top of the Bundesliga, has caught the eye. 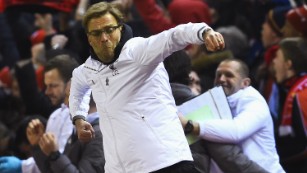 His pace, power and ability to find the net with ease means he is one of the most prolific strikers in world football.

Dortmund has already said it won’t be selling its prize asset but this performance will give those chasing the player’s signature another reminder of his undoubted talent.

Against a Tottenham side which is currently second in the Premier League, he excelled once again, ably supported by his teammates in what turned out to be a one-sided contest.

This was always going to be a difficult test for Tottenham, which rested leading scorer Harry Kane, while Dele Alli, one of the breakout stars of the Premier League season, was missing through suspension.

Dortmund, which has won nine of its past 11 games and has not lost since December and started at a pace which most teams would struggled to keep up with.

It was Aubameyang, who created the first real opportunity of the game as the home side scythed through the heart of the Tottenham defense with considerable ease.

Running towards goal, he produced the perfect pass to unlock the Tottenham back line but Erik Durm contrived to slide his effort wide of the far post.

Dortmund, which was held to a goalless draw by Bayern Munich last weekend, continued to threaten and Aubameyang volleyed inches over the crossbar after finding space inside the penalty area.

The black and yellow shirts swarmed forward at every opportunity with Tottenham struggling to repel wave after wave of attacks.

Henrikh Mkhitaryan, the Armenian, unleashed a rasping effort from 20-yards which Hugo Lloris parried with Aubameyang placing the ball into the empty net from an offside position.

Tottenham, so solid in defense in recent weeks, began to wobble and it was no surprise when the home side took the lead.

Marcel Schmelzer was afforded time and space on the left and his cross picked out Aubameyang who sent an unstoppable header into the far corner.

Tottenham simply could not cope with Dortmund’s high pressing and fast tempo with its midfield constantly overrun.

The second half followed a similar pattern and the home side doubled its lead just after the hour mark when Reus lashed home from close range.

A third arrived 10 minutes later when Reus, completely unmarked at the far post, ghosted through the Tottenham defense to steer Gonzalo Castro’s cross past Lloris..

That goal, Dortmund’s 64th in 20 home games this season, all but ended the tie as Dortmund and Aubameyang cruised home.

“It is difficult to explain but a bad day and I’m disappointed with our performance,” Mauricio Pochettino, the Tottenham head coach, told BT Sport.

“We did not play well. That is why we lost the game.

“We need to fight in the return leg next week. Three nil is not a good result for us but we still need to keep working hard and try next Thursday.

“This was our first time losing 3-0 this season. We need to be calm and be sure it doesn’t happen again.”