Residents in the city of Oryol are campaigning against what has been billed as Russia’s first-ever statue commemorating Ivan the Terrible, the 16th-century tsar.

Despite being known for the brutal massacre of Novogrod in 1570 – and for allegedly killing his own son – officials plan to erect the statue near a children’s theatre in time for the 450th anniversary of the southwestern city, which was founded as a fortress by Ivan IV – known as “grozny” (terrible) in Russian.

Locals have responded to the proposal with outrage. Natalya Golenkova, head of a group protesting against the plan, wrote on the Russian social network VKontakte: “In almost 500 years no one has erected a statue to Ivan the Terrible: no tsar, no emperor, no general secretary, no president.

“There’s no Ivan the Terrible even on the Millennium of Russia Memorial,” she wrote, referring to a prominent bronze monument in the city of Novgorod that features leading figures from Russia’s past.

An online petition against the statue has garnered hundreds of signatures, while various politicians – from liberal opposition member Dmitry Gudkov to pro-Kremlin journalist Vladimir Solovyov – have denounced the idea.

Even state television is questioning the plans. Last week a news reader on Rossiya-1 listed several unpopular statues in the country before saying the decision to put up the statue of Ivan IV in Oryol was made “without taking into account the opinion of residents.”

“It’s unclear if we can find someone who can stop this ‘monumental’ irritation – to stop this fruitless, pointless discussion. As if we don’t have more important problems,” he said.

Ivan the Terrible oversaw the Novogrod massacre in 1570 with the oprichnina, which he founded, the original Russian secret police force and a precursor of the Cheka, the NKVD, the KGB and the FSB.

Responding to public concerns about the statue, regional governor Vadim Potomsky said the proposed statue “won’t bother anyone” and that the “location was chosen well”, the Tass state news agency reported. 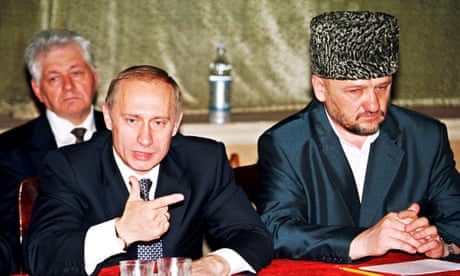 Potomsky says he does not believe the tsar killed his son. “Not one source has seen a single official document confirming that Ivan the Terrible killed his son,” he told the Moskovsky Komsomolets newspaper.

The fight in Oryol follows a series of controversies in Russia over monuments, including an ongoing debate over plans for an 80-metre statue of Jesus Christ in St Petersburg, proposals to return a statue of Soviet secret police founder Feliks Dzerzhinsky to the spot where it was toppled in 1991, and efforts to erect a towering monument to Grand Prince Vladimir – or Volodymyr – in Moscow.

Oryol itself is also no stranger to controversy over planned monuments. Last year, residents battled efforts of the powerful local Communist Party to erect a statue to Soviet dictator Josef Stalin. A petition against the project garnered nearly 7,000 signatures.