State prosecutors in Sao Paulo want the former President held in pretrial detention on charges he and his family members hid assets — specifically a beachfront condo that they say he and his family used, according to the agency. The condo was not in the President’s name. 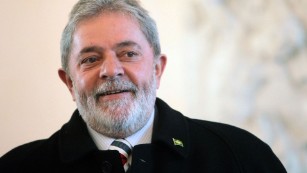 The allegations come days after federal police raided Lula da Silva’s home and questioned him for three hours in a separate investigation, this one looking into allegations he benefited from a bribery scheme involving the state-run oil company Petrobras. No charges have been brought in that case.

In that investigation, authorities believe construction companies made large payoffs to Petrobras executives and politicians in exchange for lucrative contracts.

Among other things, investigators are looking into whether funds were used to pay for other homes believed to have been used by the President.

They are also investigating any payments, donations to his anti-poverty group and speaking fees made to him by construction firms.

In the money laundering case, a judge must decide whether to accept the detention request and the charges and go to trial. No date has been set for a judge to review the argument.

Lula da Silva has denied all allegations, and his supporters have called the accusations politically motivated. He served two terms as president from January 2003 to 2011.

Also Friday, Lula da Silva’s beleaguered successor told reporters that she had no intention of resigning, despite opponents’ calls for her to do so.

Brazilian President Dilma Rousseff, who once served as Lula da Silva’s chief of staff and energy minister, has been under pressure for a number of reasons, and the recent allegations against her ally Lula da Silva haven’t helped.

But Rousseff said Friday that “no one has the right to ask for the resignation of a president legitimately elected.”

“You are all my witnesses that I don’t have the face of someone who’s going to resign,” she said.

Despite her re-election in 2014, Rousseff’s second term has been marred by a corruption scandal involving her own Workers’ Party that has sent her approval rating plummeting and provoked mass protests.

A sweeping corruption investigation into a multimillion-dollar kickback scheme at the state-run oil company Petrobras has embroiled dozens of the country’s leading businessmen and politicians. Rousseff was the chairwoman of Petrobras during many of the years that the alleged corruption took place.

Rousseff also said that her government was opposed to prosecutors’ request to arrest her predecessor.

”It is absurd, and it has no legal base,” Rousseff said. “The government rejects categorically this act against former President Lula. This is a time for dialogue, peace and quiet.”