Will China abide by the South China Sea decision?

(CNN)The Permanent Court of Arbitration in the Hague has issued a scathing legal rebuke of China’s maritime claims in the South China Sea. This stunning decision pits the international legal order against the power of a rising China, with significant ramifications for both the international legal system and for the geopolitics of Southeast Asia. Whether law can constrain power now turns on how China, the United States and other countries in the region use the new decision.

Finding in favor of the Philippines, the court determined that China’s expansive claims in the region were a violation of the United Nations Convention on the Law of the Sea, or UNCLOS, an international agreement that specifies the rights of states over the oceans and of which 166 countries are a party, including China.
China’s efforts to build islands far from its shores created no new legal rights, the court decided, and deemed illegal China’s military efforts to exclude the Philippines and other nations from fishing in the region.
South China Sea: Full coverage
China sought to avoid the dispute, refusing to send representatives to appear in person and challenging the legal right of the court to exercise jurisdiction in the case, arguing that the case related to territorial rights outside the court’s powers, rather than the maritime rights over which the court has jurisdiction.
To a large degree, international legal efforts to accommodate the rise of China have been based on avoiding direct legal conflict where possible and allowing politics and diplomacy to take their natural course. Had the court accepted the Chinese position on jurisdiction, the conflict between law and power that now arises could have been put off to another day.
The court’s findings — both that it has the power to decide the case and that China’s claims are illegal — mark the first significant international legal confrontation with a rising China. It is a bold move by the court, one that pits the authority and legitimacy of the legal institutions created by the post-World War II international order against the political and economic might of China. The question now is how both sides will respond. The answer will be more significant than the ruling itself.
Will China accept the legal principles on which the decision is based? These principles are, in fact, in China’s long-term interests, as they offer the best prospect for the avoidance of a military conflict in the region consistent with China’s peaceful rise. China need not accept them openly or publicly, but it can do so through a gradual change in its rhetoric and behavior.
For example, it can tone down its claims to legal rights that flow from created islands or tidal rock formations in the region. While still patrolling international waters, China can be more accommodating of other countries’ fishing vessels in the region. More dramatically, China could even slow down its construction of military bases in the region.
Any of those moves in the coming months would be a tacit accommodation of the international legal system and a strong signal that China is ready to help uphold an international legal system that broadly serves its interests.
However, China may decide to take a more confrontational stance, rejecting not only the court’s jurisdiction but also the underlying legal principles of UNCLOS. We will know China has taken this course if it steps up its military activities in the South China Sea, expands its island-building efforts and adopts an even more aggressive tone in its relations with the Philippines, Vietnam and other countries in the region. 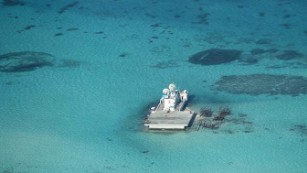 Showdown in the South China Sea: How did we get here?
Of course, China can ignore the decision, but doing so would be counterproductive. China’s success in persuading states in the region to recognize and follow its leadership depends on China’s reputation as a rule follower, not a rule breaker, as a source of economic opportunity, not security threats. Undercutting legal principles will not actually increase China’s already extraordinary influence in the region, because ignoring the court’s decision outright works counter to China’s critical leadership objective by feeding growing regional fear of China.
The challenge presented by Tuesday’s decision for the international system more generally is that the decision on which course to take is, essentially, China’s alone. The Permanent Court of Arbitration has no meaningful enforcement mechanism, and neither the United Nations nor other countries in the region have the military ability to limit China’s activities in the region.
What international actors and countries in the region can do is embrace the principles underlying the ruling without demanding immediate change. Demanding compliance with the ruling risks undermining the authority of international law itself if China continues its present course. If, however, other states and institutions embrace the broad principles of law in the ruling, while giving China the room to more gradually modify its behavior and scale back its claims, both political stability in the region and the salience of international law can be preserved.
Join us on Facebook.com/CNNOpinion.
Here, the lesson of the ruling for the United States is, perhaps, most obvious of all. The United States has refused to join UNCLOS, even after a strong push to do so early in the Obama administration. The U.S. Senate was concerned that UNCLOS would constrain the United States and limit U.S. actions in the seas. However, this decision shows that international law, including UNCLOS, is and will be a critical tool not for constraining the United States, but for ensuring that established and rising powers alike operate within a common legal framework that serves collective interests.
The United States is sure to invoke the findings of the court in its future patrols of the South China Sea. Doing so as a member of UNCLOS would dramatically change U.S. legitimacy and effectiveness in enforcing the court’s ruling.

William Burke-White is a professor of law and the director of Perry World House at the University of Pennsylvania. From 2009-2011, he served on Secretary of State Hillary Clinton’s policy planning staff at the U.S. Department of State. The views expressed in this commentary are his.