The move marked the first time Washington sanctioned Kim Jong Un personally. Administration officials said Kim was “ultimately responsible” for what they called “North Korea’s notorious abuses of human rights.”
“Under Kim Jong Un, North Korea continues to inflict intolerable cruelty and hardship on millions of its own people, including extrajudicial killings, forced labor, and torture,” Acting Under Secretary for Terrorism and Financial Intelligence Adam J. Szubin said in a statement announcing the new action.
“As a result of today’s actions, any property or interest in property of those designated by (Office of Foreign Assets Control) within U.S. jurisdiction is frozen,” the Treasury Department said. “Additionally, transactions by U.S. persons involving the designated persons are generally prohibited.”
A lot of international financial institutions similarly avoid those designated on these types of sanctions list so they can do business with U.S. institutions.
North Korea on Thursday lashed out at the move, calling it an “open declaration of war against DPRK” and “the worst crime that can never be pardoned,” according to state news agency KCNA.
While North Korea urged the United States to retract the sanctions, it also said that it will handle all issues “arising in the relations with the U.S.” under wartime law, KCNA reported, quoting North Korea’s Foreign Ministry.
The sanctions also extend to five North Korean state entities, including the Ministry of People’s Security, which the report says oversees labor camps and other detention facilities, where torture, execution, rape, starvation and forced labor takes place. Choe Pu Il, the minister of People’s Security, was also named to the list, along with several top officials in the agency. 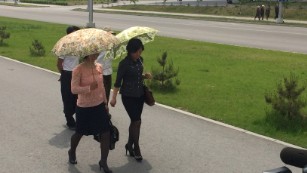 U.S. officials briefing reporters on the new actions say they expected the sanctions to have “a worldwide ripple effect” making it harder for those on the list to do business with global financial institutions.
The officials also noted that this was the first time many of the North Korean officials involved have been publicly named, citing the secretive nature of the regime.
They also expressed the hope that the State Department report and sanctions will help convince mid- and lower-tier officials to refrain from committing human rights abuses out of fear of being blacklisted.
Opinion: Don’t blink over North Korea
“Lifting the anonymity of these functionaries may make them think twice from time to time when considering a particular act of cruelty,” one senior administration official said.
North Korea is already subject to heavy U.S. sanctions for its past nuclear and missile activity. But Wednesday’s action marks the first time regime officials have been sanctioned for human rights abuses.
The new measures were taken in conjunction with the State Department’s issuance of a report entitled “Serious Human Rights Abuses or Censorship in North Korea,” which was mandated by the U.S. Congress under the North Korea Sanctions and Policy Enhancement Act, passed earlier this year.
But the officials said the administration had been working even before the passage of the legislation to single out officials for possible sanctions in an effort to expose officials in the North Korean regime who are responsible for serious human rights abuses and censorship in North Korea.

CNN’s KJ Kwon in Seoul contributed to this report.