The truth about Syria Undercover behind rebel lines

Rebel-held Syria (CNN)There’s a sickening moment between hearing the planes and waiting for them to drop their payload. A pit forms in your stomach. You know you could die, but you also know there’s no way to divine where the strike will hit.

On a hill overlooking Ariha, our guard Abu Youssef seems to have located the jet in the sky and is following it with his eyes. “Russian planes,” he says.

Suddenly he ducks. The sound of the explosion rings out with a “thwoomp.”

Where the strike hit, there are other sounds. Sirens. People screaming for help. Rescue workers shouting for an ambulance. A woman wailing. Metal scraping against rubble as volunteers furiously try to dig people out of the debris. Survivors in this battered Syrian town cursing President Bashar al-Assad and his Russian supporters.

At the nearest hospital, some 10 miles away, still more sounds. Men arguing as they try to delicately move a gravely injured boy from the back of a car. Doctors shouting at people to get back. A family member weeping softly.

To a visitor, there is something dizzyingly surreal about it. The sounds stay with you as long as the sights. But these are the sounds of everyday life in northern Syria.

We had been on the ground for less than 24 hours when the airstrikes hit. Now, five years into this war, the attacks against areas controlled by rebels are relentless, particularly from the air.

It began with crudely made barrel bombs pushed, seemingly haphazardly, out of the back of Syrian Air Force helicopters. Then, last September, Russia joined the fight and the airstrikes — thousands of them — became even more powerful and punishing.

Russia says it is only targeting “terrorists” — fighters with ISIS and the al Qaeda affiliate Jabhat al-Nusra. But the strike we saw hit a fruit market.

Monitoring groups say nearly 2,000 civilians have been killed since the Russian intervention began. 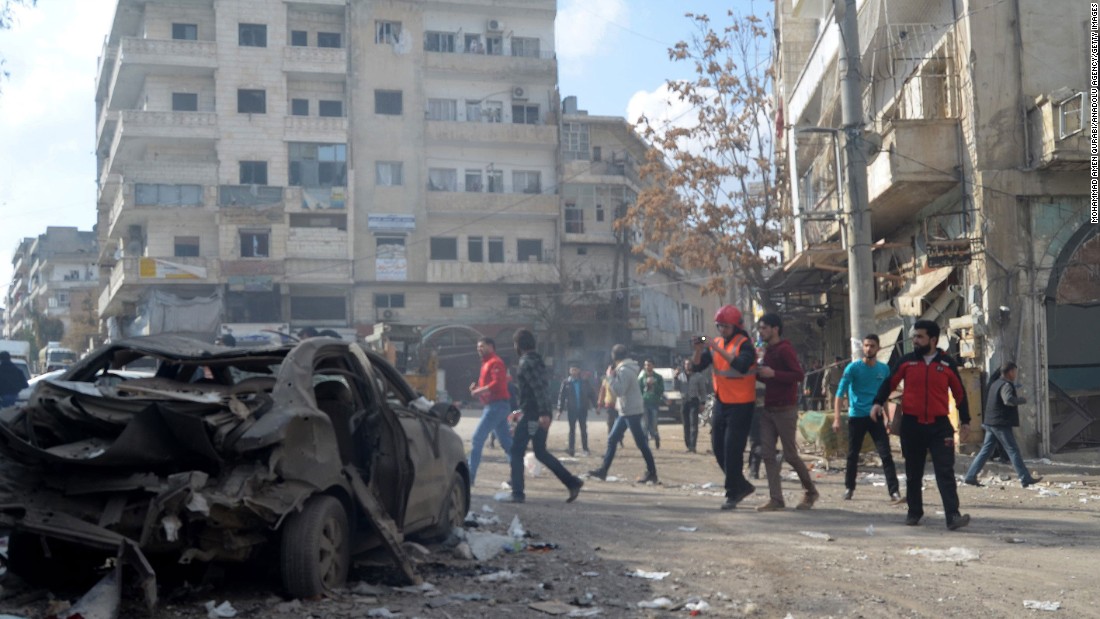 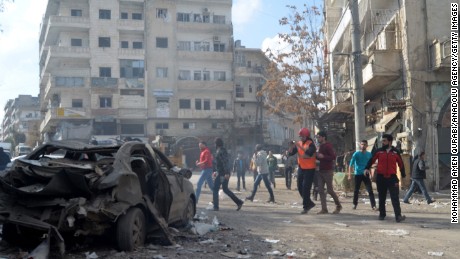 Undercover in Syria: Witness to a war crime 03:37

“Every day, I struggle with whether to send my daughter to school,” the young woman tells me.

We’re sitting on cushions on the floor of a house in Maarat al-Numan, a town ravaged by airstrikes in the past few months. Her 6-year-old daughter stands next to her, shyly eyeing these foreign visitors as she chews her hair.

Several Syrians have told me that you don’t hear the planes if you get hit, you only hear them if you’re not the target. It seems to provide some comfort — at least you don’t know you are going to die in the moments before it happens. I don’t share this thought with the young woman. I nod silently.

In Syria now, there are lots of silences. Much remains unsaid. Questions are generally greeted with suspicion. A culture of fear permeates the place.

Almost no Western journalists have visited this part of the country in over a year.Turkey has all but sealed the border into rebel-held areas — and inside, the threat of indiscriminate air strikes and kidnapping looms.

We traveled undercover, wearing the niqab, a black veil that covers the entire face, except for a small slit at the eyes. It doesn’t take long for people to work out that I’m a foreigner, yet very few ask where I am from or what I am doing here. They know better than to ask such questions. Instead they tell their stories. They want the world to know.

The journey to get into Aleppo is now extremely difficult and dangerous. Assad’s ground troops have used Russian air cover to encircle the rebels who control the eastern part of the city, where up to 320,000 people may be trapped.

There is now only one road that rebels can use to get in and out of the city — once Syria’s largest, a bustling economic and cultural hub — and it is flanked on either side by enemy forces. Snipers are everywhere. They call it the road of death.

We hurtle down the road at top speed, hearts in our throats. I look at the berms of earth built up on either side to conceal cars from enemy view. They seemed pathetically vulnerable.

I am reminded of a visit to Syria four years ago when one rebel leader proudly showed me a weapon they had been working on for months. It was a homemade catapult. A catapult to fight against artillery shells. “David and Goliath,” I whispered to myself. I didn’t know whether to laugh or cry.

Closing in from all sides 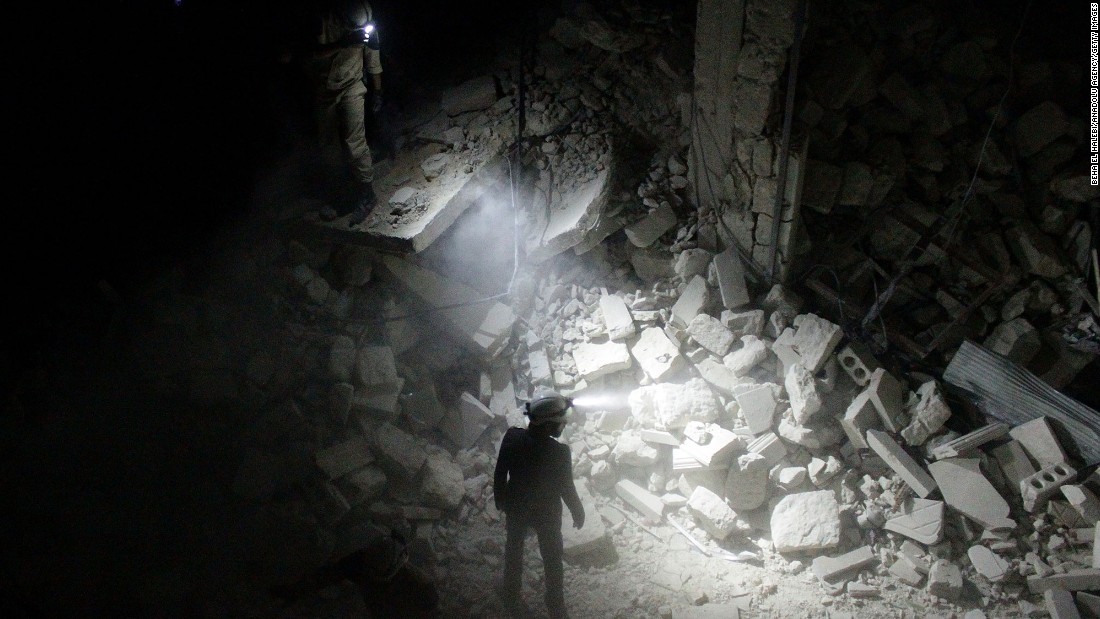 A search team inspects a collapsed building in Aleppo in July.

“The first was my grandson. And after him his cousin, my son, my daughter’s son, my middle son, and one of his children, then my third son, and his son. All died on the frontlines, and I thank God for that.”

In a dark and cramped apartment in eastern Aleppo, 70-year-old Souad is listing family members who have been killed fighting in this war. Her milky eyes gaze blankly into the air as she counts them all on her bony fingers.

There are nine in total. My brain struggles to process the scale of the loss. There are no tears. Sadness and loss long ago hardened into grim acceptance, made possible by an unwavering faith in God. 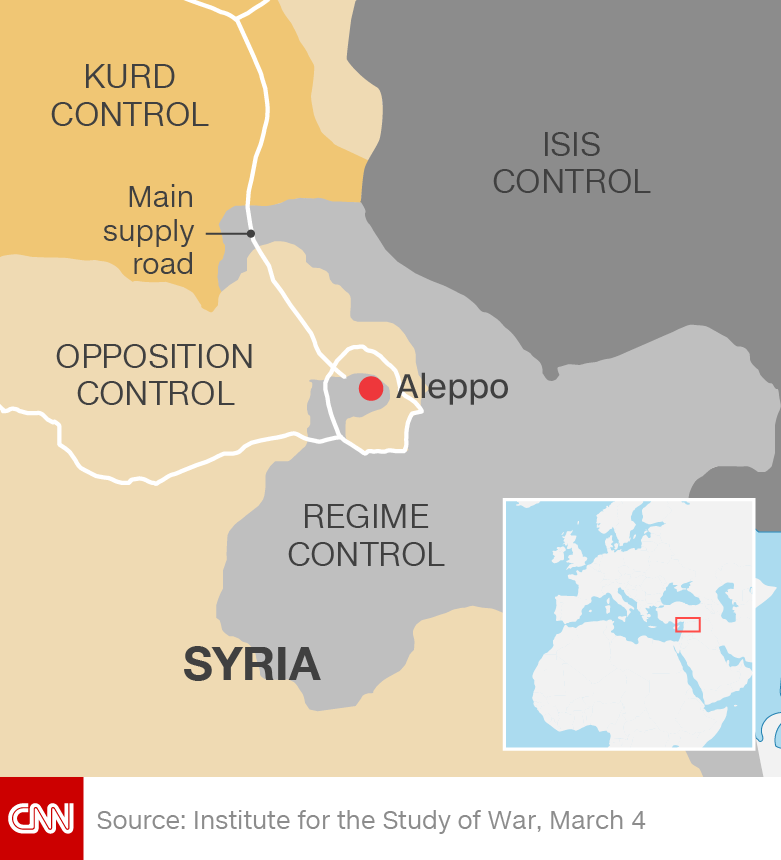 Her grandson sits next to her as she speaks, listening attentively as he sips thick black Arabic coffee. He looks 40 but is probably in his late 20s. His beard is long and he wears camouflage pants. He is a fighter with Ahrar al Sham, an Islamist rebel group that is fighting on three fronts. On one is Assad’s army. On another is ISIS. On the third, Kurdish forces lie in wait.

When I address him, he looks down shyly to avoid meeting my eyes. To some, it might appear as sexism or disdain. But I understand it as it is intended, as a gesture of respect.

I wonder what will happen if he is killed — if Souad will continue to stay here in Sukkari, a neighborhood shattered by Russian and regime bombs.

Yes, she tells me. She will stay here until she dies.

The war on normalcy 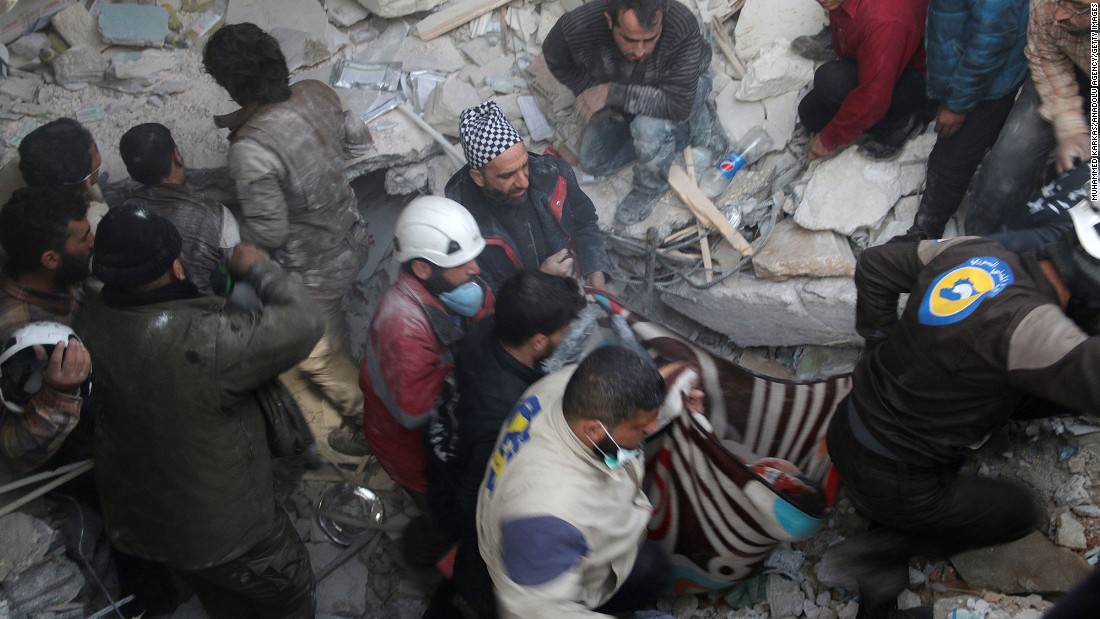 Rescue workers pull victims from an Idlib hospital hit by an airstrike in February.

Doctor Firas al Jundi doesn’t have long to sit down with us. He is one of a handful of surgeons in the only hospital still standing in Maarat al-Numan. Last month, the largest hospital, supported by Doctors Without Borders, was destroyed by airstrikes. Twenty-five people were killed. The group said it believed Russian or regime missiles were responsible. Russia has categorically denied involvement.

Jundi tells us he now sees up to a hundred people in a day. His face is gray and dark circles line his eyes. It’s the face of someone who doesn’t know what to think or feel anymore, of someone who is just going through the motions. When he talks, he presses his hands down on the desk, as if it is somehow the only thing holding him up.

He tells us that they don’t have enough medicine, that the water is too dirty to use for surgeries. He says that, despite their denials, the regime and Russia are targeting hospitals deliberately and cynically. That four hospitals were hit in one day last month. That they want to destroy all medical services so that people will be forced to flee. 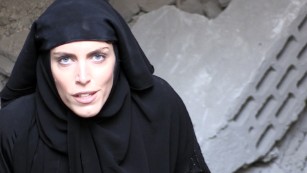 I ask him why he doesn’t leave Syria. With a medical degree it would be relatively easy for him to go somewhere safer. He pauses before answering. I can hear him swallow.

“If I did that I would abandon my conscience,” Jundi says. His face cracks and he whimpers softly. He is breaking down.

“This is our country, we can’t desert it. If we leave then we have sold our morals. Who would treat the people?” He stops and sobs. I dig my fingernails into my palms to stop my own tears.

“I can very easily leave, but we will remain steadfast,” he pushes on, growing stronger as he continues. “I am prepared to die rather than to leave. And I will carry on no matter what.”

It’s the kind of bravery that leaves you baffled. The day before, we interviewed a lawyer who survived a strike on a courthouse. It was one of two we visited that have been leveled. “This is the tax we pay for living in a liberated area,” he said matter-of-factly as we stood in the rubble.

Assad and his Russian allies say that theirs is a war against terrorism. But on the ground, people believe that everyday life is the target. It’s a war on normalcy. 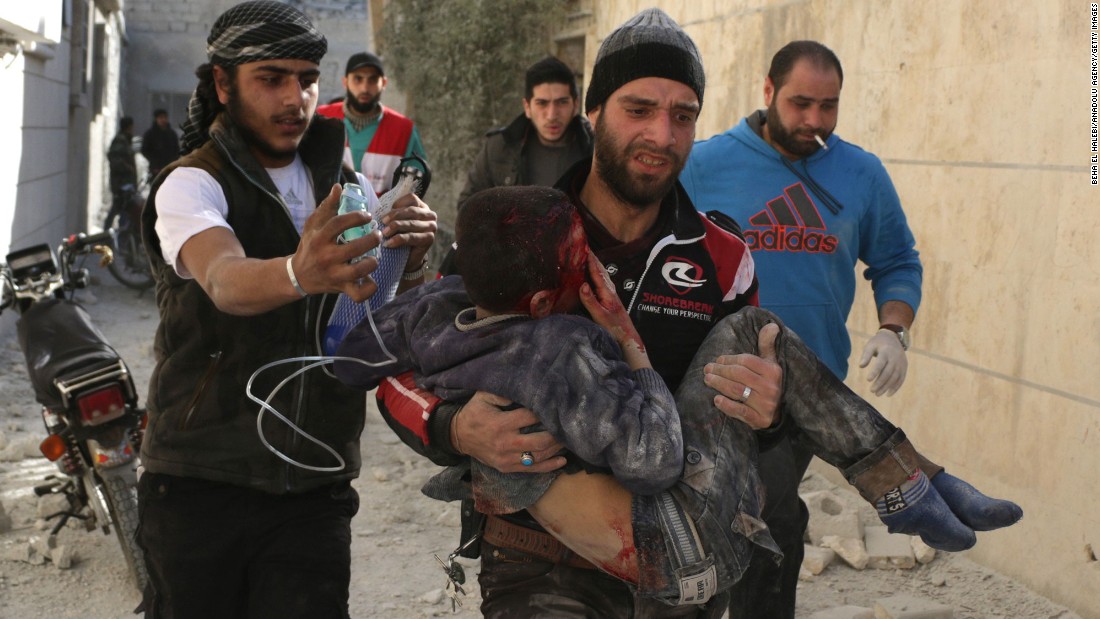 Men treat a child after an airstrike on a residential area of Aleppo in February.

I look out the car window through the slit in my niqab. “Democracy is the religion of the West,” a sign reads in black and white. There are lots of signs like this in these parts now. Billboards urge men to join the jihad against Assad and encourage women to cover themselves completely. We drive through checkpoint after checkpoint manned by Jabhat al-Nusra, the al Qaeda affiliate here.

The radicalism that has taken hold in rebel-held Syria is more pronounced each time I visit, but the writing has been on the wall for years.

In 2012, I asked then-Secretary of State Hillary Clinton if she was concerned that Islamist and jihadist groups would exploit the vacuum created by the chaos and violence in Syria if the international community didn’t somehow fill the void. She deftly avoided answering the question.

People will tell you that they hate extremism. Yet Jabhat al-Nusra enjoys a huge amount of support on the ground.

It is a conflicted and complicated relationship. One young media activist told me in one breath that he hated Nusra — and in the next, added that his cousin was a fighter with them.

Years ago, a Syrian-American doctor explained it to me like this: Imagine you’re drowning, that you’re about to die and you’re desperately looking for anyone to help you, but there’s nobody there.

But then you see someone holding out their hand. And maybe you don’t like the look of that person, but it’s your only chance to survive. So you take their hand.

It’s our last day in Syria and we are in a sun-drenched olive grove near the Turkish border. It is spectacularly beautiful, serene even — a world away from the devastation we witnessed hours earlier at the site of an apparent airstrike in the town of Daraat Izza.

The contrasts and contradictions of this country leave me feeling light-headed. Syria is hell. But standing in the warm sun, watching the silver green olive leaves shiver in the breeze, it is also paradise. A ceasefire has been in place for a couple of days, though based on what we saw and heard, it’s difficult to have much faith that it will hold.

We are preparing to leave, saying our goodbyes. We hand over a bag full of British chocolates to our security guards. Abu Youssef thanks us and quietly hands each of us a folded piece of white paper with our initials on it.

“Promise me you won’t read these until you get back home to London,” he says.

Two flights and 72 hours later, we open the letters.

“I hope you have a good idea of us,” they read. “Please tell the world the truth about Syria.”