The United States is evacuating non-emergency staff from its embassy in South Sudan, after an escalation of fighting in the capital that has killed scores including a Chinese U.N. peacekeeper.

The State Department said the security situation in Juba Sunday had seen a “sudden and serious deterioration,” with clashes between government and opposition forces breaking out into “general fighting.”
The United Nations Security Council, which held a closed door meeting in New York Sunday, expressed “shock and outrage” at attacks on civilians and U.N. compounds, saying they may constitute war crimes.
It called on President Salva Kiir and his rival Vice President Riek Machar to control their respective forces, prevent the spread of violence and genuinely commit themselves to the implementation of a ceasefire and peace agreement.
Fighting first broke out Thursday, with skirmishes between troops loyal to Kiir and soldiers who support his deputy Machar.
Fighting flared again Sunday, with gunfire exchanged outside a U.N. building, after a lull Saturday when the young country celebrated the fifth anniversary of its independence from Sudan.
South Sudan independence day violence leaves nearly 150 dead
“What we may be seeing is a total breakdown of command and control in Juba,” said Kate Almquist Knopf, director of the Africa Center for Strategic Studies. “We need to watch carefully for whether a cycle of reprisal killings by either side begins in the next few days.”
Japan’s ambassador to the U.N., Koro Bessho confirmed the death of the Chinese soldier. Chinese and Rwandan peacekeepers also sustained injuries.

Earlier, South Sudan’s information minister said the government is “in full control” of the capital, Juba, despite the United Nations reporting that the weekend’s deadly violence had carried into Sunday.
Church services were interrupted by fighting between troops loyal to the president and those backing the vice president, but the violence has since subsided, Information Minister Micheal Makuei Lueth told South Sudan Broadcasting Corporation.
Lueth said President Kiir would issue a permanent and unilateral ceasefire before Sunday’s end and urged his rival, Vice President Machar, to do the same “because we want to save the lives of the people of South Sudan.”
How many have been killed in fighting between factions loyal to Kiir and Machar is unclear. Though one estimate puts the death toll close to 150, other reports indicate more than 270 have been killed. CNN is working to confirm an exact death toll.

Gunfire from “heavy weaponry” was exchanged for much of Sunday outside a U.N. building on the outskirts of Juba, the U.N. mission to the country said. 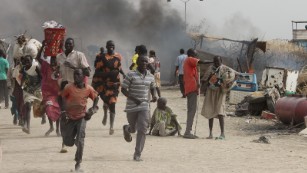 Shots fired at US embassy vehicles in South Sudan
The mission sent out a series of tweets at about 8:25 a.m. (1:25 a.m. ET) describing “gunshots” and a “heavily armed exchange” outside a U.N. compound.
The U.S. Embassy issued an alert saying that fighting between government and opposition forces was ongoing at the U.N. mission’s headquarters, the Jebel area of the city and near the airport.
The U.N. mission in South Sudan, known as UNMISS, said that 1,000 internally displaced people had fled its protection as violence hit areas near their camps.
“Both UNMISS compounds in Juba have sustained impacts from small arms and heavy weapons fire.”
The United Nations urges all parties to respect the sanctity of the United Nations and condemns any deliberate targeting of United Nations premises and its personnel,” it said in a statement.

The weekend violence erupted when Kiir and Machar were meeting to discuss previous clashes between their forces. Outside the presidential compound where the meeting took place, a gunbattle kicked off.
Pockets of violence broke out Thursday evening, and by Friday, soldiers loyal to Kiir exchanged heavy gunfire with others backing Machar, in a bloody skirmish that left almost 150 people dead by Saturday, according to Machar’s spokesman, James Gatdet Dak.
CNN has been unable to independently verify the exact death toll. 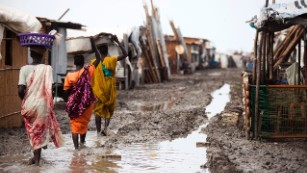 How the UN failed South Sudan (Opinion)
The Indian Embassy in South Sudan advised its citizens “not to panic” and to stay indoors. Many of the UNMISS staff members are Indian nationals.
A U.N. base was attacked last week.
“We heard heavy artillery fire at the U.N. (base), and that continued for about an hour or so and then stopped. It was coming form the outer perimeters of the compound,” said Shantal Persaud, acting spokeswoman for the U.N. mission.
Helicopter gunships were seen in the sky, and tanks rumbled through the streets. Under the peace deal, both government and opposition troops were stationed in Juba, a plan which many criticized because it put both forces in close proximity.

Kenya Airways, which operates two flights a day to Juba, said it was suspending all flights to the city because of an “uncertain security situation,” while Britain’s Foreign Office advised against all travel to South Sudan, saying “the security situation in Juba has deteriorated” since Friday.
Two weeks ago, fighting in the western city of Wau between government and opposition troops displaced at least 70,000, according to the United Nations.
The country is nearly out of money because its funds come almost exclusively from oil revenue — the value of which has plummeted. People have become desperate. In lieu of payment, government soldiers have reportedly been allowed to rape women, a U.N. report said.
South Sudan gained independence in 2011 after 98% of the population voted to break away from Sudan. The East African nation, the youngest country in the world, quickly fell into civil war that took on ethnic undertones.
In December 2013, soldiers from Kiir’s Dinka ethnic group tried to disarm Nuer soldiers perceived to be loyal to Machar. Soldiers targeted Nuer civilians in the ensuing fighting, Human Rights Watch says.
The civil war was gruesome — at least 50,000 were killed, more than 2 million displaced, and nearly 5 million people faced severe food shortages. Under a peace deal signed in August, Kiir is the president of the country and Machar is the first vice president, but the fighting hasn’t stopped.