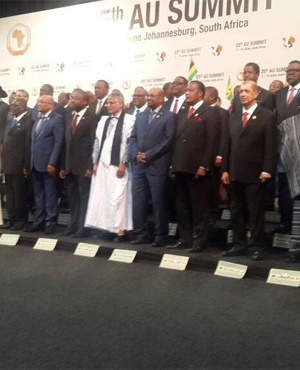 African leaders pose at the AU Summit in Johannesburg. Sudan President Omar Al-Bashir was among them. (Mahlatse Gallens, Twitter)

Johannesburg – Sudanese President Omar al-Bashir cannot be arrested while Sandton, the area hosting the African Union summit, is still under the jurisdiction of the organisation, the South African Institute of International Affairs said on Monday.

“As we know, because the AU was holding a conference in Sandton, that area has been declared as belonging to AU which is standard,” spokesperson Hopewell Radebe said.

“So this means no SA police members can go there and arrest anyone for the duration of the conference.”

The summit began last Sunday and was expected to end on Monday.

Radebe said if Al-Bashir was to be arrested it would either be once he had moved out of the Sandton area or after the summit had been declared over, depending whether he was still around by then.

He said the South African government was aware that the issue may be raised by international organisations or lobby groups.

“South Africa knew this would be a matter and anticipated that lobby groups may try to push its hand to do something.”

The High Court in Pretoria will on Monday hear an application on whether South African authorities can arrest him.

On Sunday, Judge Hans Fabricius ordered that the Department of Home Affairs ensure that all points of entry and exit be informed that Al-Bashir was not allowed to leave until the SA Litigation Centre’s (SALC) application that South Africa arrest him, is concluded.

The SALC wants South Africa to enforce two warrants for Al-Bashir’s arrest issued by the International Criminal Court (ICC) in 2009 and 2010 relating to alleged war crimes and genocide.

It said that on Saturday the ICC ruled that diplomatic immunity did not apply to heads of state wanted for trial and issued a plea to South Africa to arrest him to stand trial.

Al-Bashir is in South Africa to attend the AU summit.

Following Fabricius’ order, justice department spokesperson Mthunzi Mhaga said South Africa would take reasonable steps to ensure that officials at all points of entry and exit were told of the court order.

There have been conflicting reports about whether al-Bashir was still in South Africa or not.

Sudan’s Information Minister Ahmed Bilal Osman told Bloomberg on Sunday evening that al-Bashir had left South Africa and was on his way home.

“The president finished his business and is coming back home.

“Al-Bashir went to South Africa with complete guarantees that it will respect the African position regarding the ICC,” he reportedly said.

Mhaga told News24 on Monday morning: “As a legal team we move from the premise that he is still within the country as we are yet to verify these conflicting media reports.”

A Sudanese presidency official said Al-Bashir was still in Johannesburg on Monday morning and would leave later in the day.