(CNN)President Barack Obama announced Friday he was designating the area around the Stonewall Inn in New York City as the country’s first national monument to lesbian, gay, bisexual and transgender (LGBT) rights.

“This week I’m designating the Stonewall National Monument as the newest addition to America’s national park system,” Obama said in a video released by the White House on Friday.
“I believe our national parks should reflect the full story of our country — the richness and diversity and uniquely American spirit that has always defined us, that we are stronger together. That out of many, we are one,” Obama said.
The White House said the monument would encompass Christopher Park, the Stonewall Inn and the surrounding streets and sidewalks that were the sites of the 1969 Stonewall uprising.
In the early morning of June 28, 1969, a police raid on the Stonewall Inn — a typical occurrence at gay bars in the 1960s — made history when patrons fought back.
After police arrested many Stonewall patrons that morning, people protested outside the bar for weeks afterward, leading to the first march for gay and lesbian rights in July 1969.
Those protests are often credited as a flashpoint for LGBT rights in the United States.
While Obama’s announcement came two days before New York City’s Sunday pride march, which is often celebratory, the attack on the Orlando gay nightclub Pulse that killed 49 people added a somber tone to the announcement.
June is traditionally pride month in many cities around the world, with people turning out for parades and picnics.
While many of those parades have taken on an air of celebration in recent years, both the first parade and the modern gay rights movement can be traced back to the 1969 uprising at the Stonewall Inn.
Stonewall Inn granted NYC landmark status
“The Stonewall uprising, led primarily by people of color and people of transgender experience, was a watershed moment in our nation’s history, sparking what many call the beginning of modern-day LGBT rights movements,” said Wendy Stark, executive director of the Callen-Lorde Community Health Center, which primarily serves New York City’s LGBT community.
“The recognition of Stonewall as a national monument is an important step in recognizing our vibrant past and spotlighting the unique contributions LGBT Americans make to the rich fabric of our nation,” she told CNN. 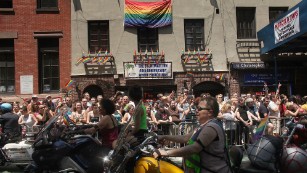 Photos: The history of Stonewall Inn

“In light of the Orlando massacre as well as the daily violence and discrimination our communities still face, it’s never been more important to observe LGBT history in this way,” she said.
Stonewall has remained a gathering place for the LGBT rights movement, attracting celebrations after the Supreme Court ruled for same-sex marriage equality and mourners in the aftermath of the Orlando shooting. Protestors marched from Grand Central Terminal to the Stonewall Inn on Sunday to rally against violence toward the LGBT community.
National Park Service turns 100
The National Park Service, which turns 100 this year, has expanded its efforts to include sites that tell the story of the LGBT community and other diverse U.S. communities, park service director Jonathan Jarvis told CNN in April.
The effort includes a Lesbian, Gay, Bisexual, Transgender and Queer (LGBTQ) Heritage Initiative, launched in 2014, to identify places and events associated with the story of LGBTQ Americans for inclusion in the park service.
On Monday, June 27, Jarvis and Obama adviser Valerie Jarrett will join other government officials and LGBT leaders in public dedication ceremony of the new monument.
LGBT Milestones Fast Facts
Nearly two years ago, the National Parks Conservation Association launched a national effort to identify potential sites for an LGBT monument.
“This site is so perfect, and it really is recognized as the birthplace of civil rights for LGBT people,” said Theresa Pierno, the non-profit’s president and CEO. The LGBT movement “really is a struggle for human rights and civil rights, and it’s a story that needs to be told.”
Photos: The first gay pride parades
A couple kisses after the parade in Central Park.
Hide Caption
4 of 7
Photos: The first gay pride parades
Several other U.S. cities followed with their own pride parades. Here, people march down Hollywood Boulevard in Los Angeles on June 29, 1970.
Hide Caption
5 of 7
Photos: The first gay pride parades
A crowd holds banners as they march in the Back Bay neighborhood of Boston in 1970.
Hide Caption
6 of 7
Photos: The first gay pride parades
People march in the Boston gay pride parade.
Hide Caption
7 of 7 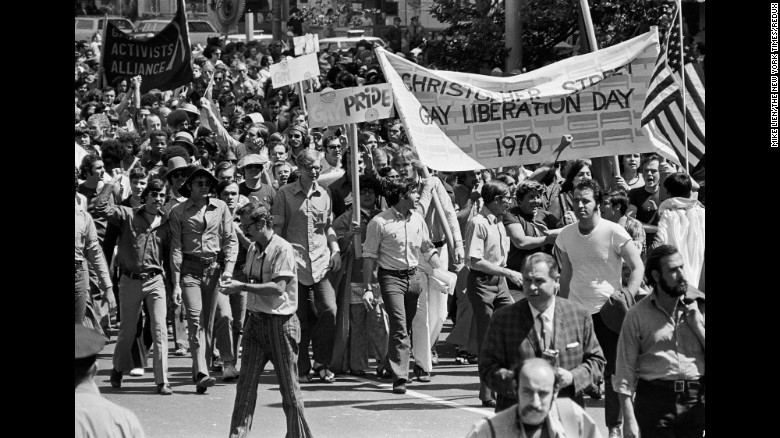