(CNN)Myanmar’s President Thein Sein has agreed to meet with Aung San Suu Kyi as early election results point toward victory for her National League of Democracy.

The President’s office didn’t spell out when such a meeting would take place, but congratulated her and the party on their success.

“We will wait until the … counting of the ballots eases up and try to arrange a time to meet when it is a bit quieter,” said Zaw Htay, director of the President’s office.

The NLD has won 163 of the 182 seats declared so far in the country’s parliament, the Pyidaungsu Hluttaw.

Suu Kyi herself won a seat from in the Kawhmu constituency in Yangon, the Union Election Commission said Wednesday..

Barred from the top spot

And yet, the Nobel Peace laureate — the leader of Myanmar’s long-fought democracy movement — can’t become president. 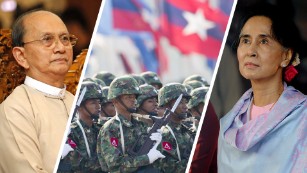 Why Myanmar is such a dramatic story 03:47

A change in Myanmar’s constitution, drafted by the military, prevents anyone with foreign family members from becoming the nation’s leader.

In letters published in local media, Suu Kyi had requested a joint meeting with the commander in chief of Myanmar’s armed forces, the chairman of the parliament and President Thein Sein.

She said last week she would be “above the President” if her party won the parliamentary election.

But complicating any efforts to change the rules in the future, the military also has an effective veto over any proposed constitutional changes.