(CNN)In any normal presidential election, it would be hard to overshadow news that the FBI interviewed one of the candidates for three and a half hours about potential criminal behavior.

But in 2016, Donald Trump seems to be able to seize any news cycle — intentionally or otherwise.
His Saturday tweet of a graphic that included Hillary Clinton’s face, a six-pointed star, a pile of cash and the words “most corrupt candidate ever” drew immediate backlash for evoking anti-Semitic imagery. The image was posted 10 days earlier to an anti-Semitic, white supremacist message board.
Trump on Monday morning initially addressed the controversy — again on Twitter — by blaming the “dishonest media” for “trying their absolute best to depict a star in a tweet as the Star of David rather than a Sheriff’s Star, or plain star!”
On Monday afternoon, the Trump campaign finally issued a statement on the matter — one that amounted more to a response to the Clinton campaign statement than an explanation of his tweet.
Trump rejected the Clinton campaign’s accusations that his tweet was anti-Semitic by slamming “false attacks” and insisting the star represented a sheriff’s badge.
“These false attacks by Hillary Clinton trying to link the Star of David with a basic star, often used by sheriffs who deal with criminals and criminal behavior, showing an inscription that says ‘Crooked Hillary is the most corrupt candidate ever’ with anti-Semitism is ridiculous,” Trump said in a statement.
Trump’s statement did not address the fact that the campaign tweeted an image that had previously been posted on an anti-Semitic, white supremacist message board. His statement also didn’t explain where the campaign obtained the image.
On Monday night the Trump campaign’s social media director, Daniel Scavino, filled in some details on what he said were the image’s origins.
“The social media graphic used this weekend was not created by the campaign nor was it sourced from an anti-Semitic site,” Scavino said in a statement separate from Trump’s. “It was lifted from an anti-Hillary Twitter user where countless images appear.”
“The sheriff’s badge — which is available under Microsoft’s ‘shapes’ — fit with the theme of corrupt Hillary and that is why I selected it,” Scavino added.
Scavino also said that as the campaign’s social media director, “I would never offend anyone and therefore chose to remove the image.”
Trump’s stumbles were suddenly back in the spotlight on a weekend that would have otherwise focused on Clinton’s vulnerabilities.
Trump’s prolific Twitter habit is once again forcing Republicans to confront questions about the temperament of the man they will soon formally nominate as their presidential candidate and his apparent unwillingness to forcefully reject the support of those with racist or anti-Semitic views. It also comes as Trump tries to manage a more disciplined campaign, underscoring fears among some in the GOP that the businessman is unable to avoid self-inflicted wounds.
Adding to the fire is the Trump campaign’s refusal to answer questions about the tweet, its origin or whether anyone would be held accountable. It simply deleted the tweet and replaced the six-pointed star with a circle.
The Clinton campaign blasted Trump’s tweet Monday as part of a broader pattern.
“Donald Trump’s use of a blatantly anti-Semitic image from racist websites to promote his campaign would be disturbing enough, but the fact that it’s part of a pattern should give voters major cause for concern,” Sarah Bard, Hillary for America’s director of Jewish outreach, said in a statement. “Now, not only won’t he apologize for it, he’s peddling lies and blaming others. Trump should be condemning hate, not offering more campaign behavior and rhetoric that engages extremists.”
It’s not the first time Trump’s own controversies have overshadowed Clinton’s as a result of the presumptive Republican nominee’s unforced errors.
Two days before Trump created a weeks-long news cycle by accusing a judge of being biased because of his Mexican heritage, Clinton faced one of the most damaging news items of her candidacy when the State Department’s inspector general released a scathing assessment of Clinton’s private email use.
In Trump, GOP activists see opening to move party right on Israel
But Trump’s tirade on the judge, his doubling down on those race-based accusations and the ensuing rift it provoked between Trump and newly-supportive Republican leaders eclipsed Clinton’s email woes.
Shielded by the holiday weekend, top Republicans in the House and Senate were quiet on Trump’s latest controversy.
But the campaign’s refusal to show any sense of accountability when it comes to the tweet may only add to the storm.
The first prominent Trump surrogate to address the controversy was not a campaign spokesperson or Trump himself, but was instead Trump’s recently-ousted campaign manager Corey Lewandowski who blamed “political correctness run amok” for the outcry during a Sunday interview on CNN’s “State of the Union.” 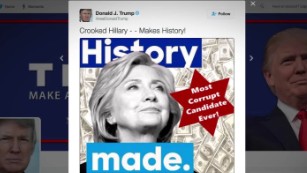 Lewandowski slams tweet outrage 02:36
Trump campaign adviser Ed Brookover told CNN’s “New Day” Monday that “there was never any intention of any anti-Semitism.”
“There’s no anti-Semitism in Mr. Trump’s body, not one ounce, not one cell,” he told CNN’s Alisyn Camerota, adding later, “Not every six-sided star is a Star of David.”
Trump on Sunday, meanwhile, refused to address the controversy over his tweet and sought to refocus scrutiny onto Clinton.
He slammed a “totally rigged” system that likely will not bring criminal charges against Clinton and criticized former President Bill Clinton’s private meeting with the U.S. Attorney General Loretta Lynch just days earlier.
He then tweeted condolences on the passing of Holocaust survivor and Nobel Peace Prize laureate Elie Wiesel. But still no word about his use of an image circulating in anti-Semitic circles.
Trump’s tweet Monday addressing the graphic may only serve to further extend the controversy, drawing attention away from both Clinton’s email scandal and a news cycle this week that was expected to focus on Trump’s imminent decision to pick a running mate before the GOP convention.
Republican women organize to support Clinton
Trump’s latest trouble is especially loaded because it’s not the first instance of him tweeting or retweeting something linked to white supremacists.
Trump has previously retweeted neo-Nazi accounts including one named “@WhiteGenocideTM.” In November, he retweeted a graphic of false and racist crime statistics overstating the numbers of blacks killed by other blacks.
And amid a groundswell of support from white supremacists, Trump and his campaign have been slow and even loathe to reject the support of those individuals.
When pressed by CNN’s Jake Tapper earlier this year on the support of former Ku Klux Klan leader David Duke, who continues to peddle in anti-Semitic conspiracy theories, Trump initially said falsely he did not know of Duke and would not disavow his support. He would later do so and blame a faulty earpiece.
And when he was later confronted by CNN’s Wolf Blitzer about anti-Semitic death threats some of his supporters were directing at a Jewish reporter who wrote a profile about Trump’s wife, the presumptive Republican nominee refused to condemn those actions.
“I don’t have a message to the fans,” Trump said when pressed on the anti-Semitic death threats in an interview with Blitzer in May. “A woman wrote an article that’s inaccurate.”
Now, questions continue to swirl around how his campaign obtained and decided to tweet a graphic that had circulated on a message board filled with anti-Semitic conspiracy theories and neo-Nazi message boards — and whether he will repudiate the support of individuals who prescribe to that ideology.