The two major party candidates’ responses again highlighted the sharp differences in their foreign policy stances, with Trump reiterating his belief that the U.S. needs to be “tough” in its response to terrorism.
In Nice, France, a driver plowed into a crowd celebrating Bastille Day, killing more than 70 people. Although it was not immediately clear whether the assailant had pledged allegiance to ISIS, Fox News’ Bill O’Reilly asked Trump if he would seek a declaration of war from Congress against the terror group.
“I would, I would. This is war,” Trump replied. “If you look at it, this is war coming from all different parts.”
He reiterated his belief that “we have to be tough” and his view that the U.S. should reverse its decision to allow Syrian refugees into the country.
“You know, in the old days, we would have uniforms, you knew what you were fighting. We are allowing people into our country who we have no idea where they are, where they’re from, who they are, they have no paperwork, they have no documentation, in many cases,” Trump said.
Asked later Thursday about Trump’s response by CNN’s Anderson Cooper, Clinton said it was “clear” that the U.S. was at war with terrorist groups, but she said it “was a very different kind of war.” But, she argued, greater intelligence gathering, not military force, was necessary.
“They would love to draw the United States into a ground war in Syria,” Clinton said. “I would be very focused on the intelligence surge. I would be very focused on working with our partners and allies and intensify our efforts against the ideologues that pedal radical jihadism online.” 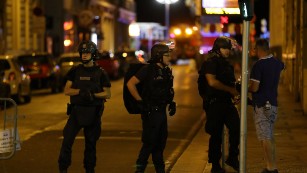 Hillary Clinton on France attack: I am sick at heart 07:13
Cooper then asked Clinton if the U.S. was at war with “radical Islam” — a phrase Trump often uses on the campaign trail and says is necessary to identify the threat. Clinton and President Barack Obama, however, have largely shied away from using the term, believing that associating terrorists with Islam helps to legitimize their interpretation of the religion.
“We’re at war against radical jihadists who use Islam to recruit and radicalize others in order to pursue their evil agenda,” Clinton responded. “It’s not so important what we call these people as what we do about them, and I think back to our success in getting (Osama) bin Laden, it was important that we built the case, we got the information and the President ordered the raid.”
Clinton also dismissed the presumptive Republican nominee’s concern about the potential of terrorists infiltrating the U.S. by posing as Syrian refugees.
“I would not short-circuit the vetting process,” Clinton said. “If we are talking about women, children, orphans who are fleeing horrific violence, that’s a different category than young men or people who have some record that could be ferreted out as some concern.”
Obama did not map out a response in his statement on the France attack, but called it a “horrific terrorist attack.” He pledged U.S. support to France as it investigates the attack.
Indiana Gov. Mike Pence, who on Thursday accepted Trump’s offer to be his running mate, also issued a statement on the attack, which he said was “a horrific reminder of the threat facing Western civilization.”
“As we mourn with the people of France, we must resolve to bring justice all those responsible and defeat this enemy of civilization at its source,” Pence said.
Other notable political figures stood in solidarity with those affected by the attack. “Our hearts are with the victims of what appears to be yet another unconscionable act of terror,” House Speaker Paul Ryan said in a statement.