FAI chief executive John Delaney said he had believed they had a case against Fifa after French striker Thierry Henry’s handball in the 2009 match.

Delaney said a “legitimate agreement” was made to drop the claim after Ireland missed the 2010 World Cup.
Fifa president Sepp Blatter is quitting with the organisation in crisis. Delaney’s comments come after a turbulent nine days for football’s world governing body amid claims of “systemic and deep-rooted” corruption.

Fifa is facing two criminal investigations by both the US for widespread bribery allegations and Swiss authorities over the 2018 and 2022 World Cup bidding processes. The Republic of Ireland were 16 minutes away from a penalty shootout for a place in the 2010 finals in South Africa when Henry handled in the build-up to William Gallas’s extra-time equaliser in the second leg of the play-off in Paris. The 2-1 aggregate win sent France to the tournament, where they were knocked out of the group stages amid a player strike.

A Fifa spokesman confirmed it had “entered into an agreement with FAI in order to put an end to any claims” against it.

But the organisation said the payment was a $5m (£3.26m) loan and was granted for “the construction of a stadium in Ireland”. The spokesman added that the FAI was to repay the money if Ireland qualified for the 2014 World Cup in Brazil, which they failed to do. Fifa wrote off the loan on 31 December 2014.

On Thursday, the FAI said the settlement was made without any conditions and was reached “following strong legal advice”, with the money going towards the new Aviva Stadium – opened in May 2010 after the old Landsdowne Road ground was redeveloped.

In a statement, the FAI said: “This is fully reflected in our financial statements, which are audited independently. The FAI accepted Fifa’s settlement offer to avoid a long, costly and protracted legal case.
“The settlement has at no time influenced the FAI’s criticism of Fifa, as demonstrated by our consistent criticisms of Sepp Blatter.”

The Republic of Ireland’s narrow defeat in the 2009 play-off is the closest they have come to qualifying for a World Cup since 2002. 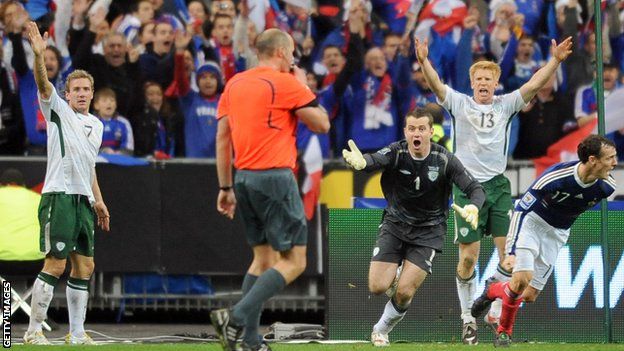 Delaney said he and Blatter “came to an agreement” after the Fifa president publicly dismissed the country’s appeal to be made a “33rd team” at the tournament.
“We felt we had a legal case against Fifa because of how the World Cup play-off hadn’t worked out for us with the Henry handball,” he said in a radio interview with Ireland’s national broadcaster RTÉ.