No sooner had he fallen to the turf, the wrath of public opinion poured forth.

Social media was buzzing — some laughed, some offered comfort … some just rolled their eyes.
Whatever he does, wherever he goes, few footballers split opinion like Cristiano Ronaldo.
The ripped torso, the shirtless posing and the manicured image have given his critics plenty of ammunition in maintaining their argument that he is one of the most self-absorbed players on the planet.
His petulance — criticizing Iceland for being “small-minded” after Portugal failed to beat the football minnow at Euro 2016, then days later throwing a reporter’s microphone into a lake — does not help his cause, either. 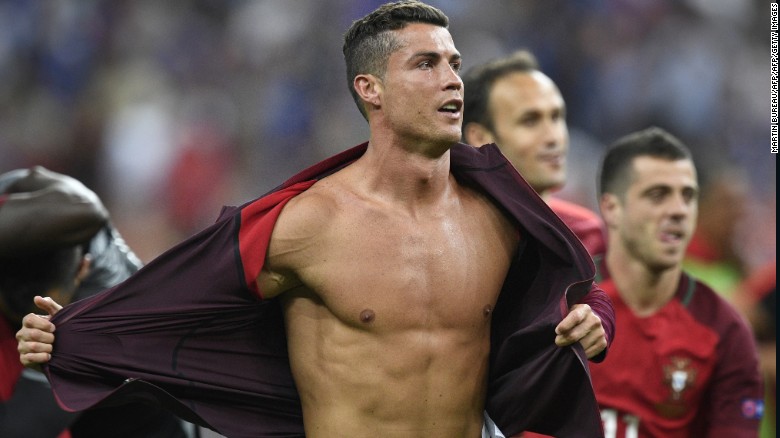 Ronaldo’s trademark celebration was on show in Paris.
Then there are the endless endorsements which have helped bring in $32 million of the $88 million he has taken home over the past 12 months — the other $56 million coming courtesy of his salary and bonuses at Real Madrid, according to Forbes.
Ronaldo’s huge social media profile does little to deter his critics — he has over 200 million followers across Twitter, Facebook and Instagram.
As a footballer, few doubt his talents but there are those who perceive him as arrogant rather than someone who oozed self-belief — as if he has become a brand rather than a person.
After the Portugal captain released his own film, a documentary detailing his life, Guardian journalist Daniel Taylor came to the conclusion that the finished product was so vain “it is difficult not to come away with the feeling that Ronaldo must shout his own name during sex.”
But watching one of the greatest players in a generation limp out of what could possibly be his last international final on Sunday may have briefly softened even his harshest of critics.
When Dimitri Payet won the ball with a robust challenge, Ronaldo was left writhing around on the floor in agony. 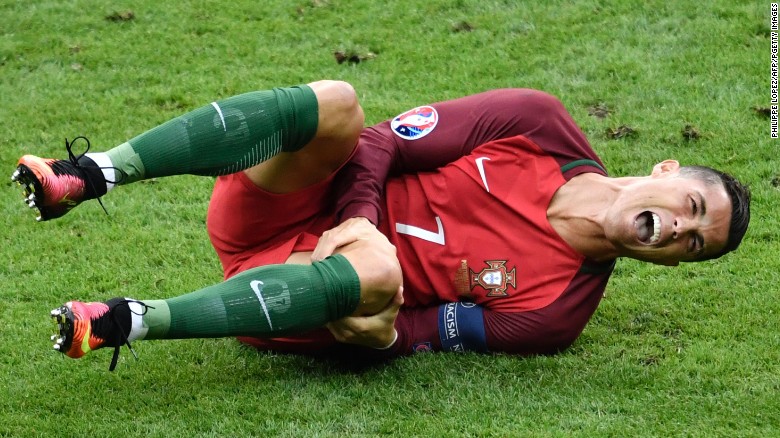 Ronaldo failed to recover from a collision with Dimitri Payet.
The 31-year-old did not recover from the seventh-minute tackle — twice he tried to run it off, twice he failed.
When he left the action after 25 minutes it was assumed that Portugal’s hopes followed too.
“He went off in tears,” Ronaldo’s former Manchester United teammate Owen Hargreaves told CNN.
“He was devastated and thought that his chance had gone for him to lead his country.
“His teammates rallied around him. They made some tactical changes and were able to do enough.
“You could see what it meant to him. He was on the side being a manager, being a coach, pushing his players on, telling them to get back and defend which I’ve never seen from him before.”
For Ronaldo, this could be the last time he arrives at a major international tournament at the peak of his powers — he came to Euro 2016 having scored 51 goals in 48 games for Real, winning the European Champions League for the second time in three years.
While his chief rival Lionel Messi retired from the international game after Argentina’s Copa America final defeat by Chile this month, Ronaldo could play on for another six or seven years according to national coach Fernando Santos. 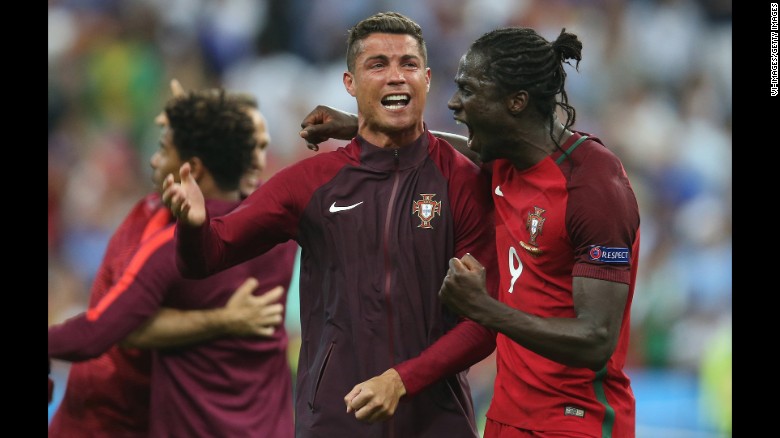 His role in the team may change by the time the 2018 World Cup comes around, but he remains integral to this current side.
And yet, while many predicted Portugal’s almost immediate downfall after the loss of its talisman, what followed was a performance of a team which not only fought and battled, but outwitted its opponent on a tactical level too.
He may not have been on the field, but that did not prevent Ronaldo from inspiring those around him.
Read: Full Euro 2016 coverage
“At halftime, Cristiano had fantastic words for us,” Portugal defender Cedric Soares told reporters.
“He gave us a lot of confidence and said, ‘Listen people, I’m sure we will win, so stay together and fight for it.’ He was fantastic.
“His attitude was unbelievable. Always he helped a lot our teammates, he always had a lot of motivational words and all the team of course reacted to them, so it was very good.” 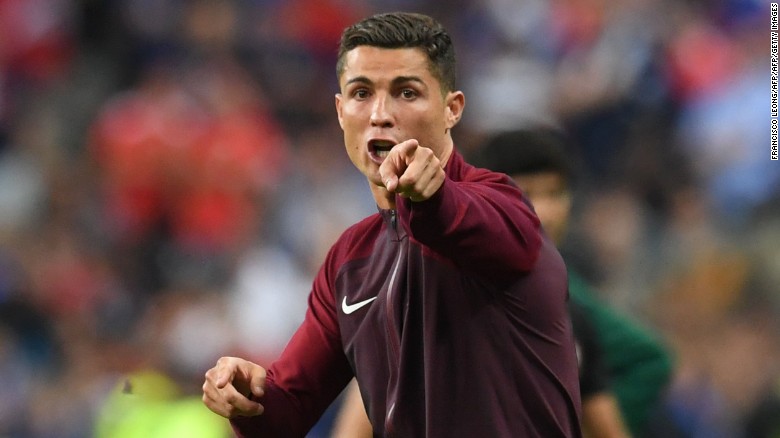 Ronaldo was on the touchline handing out instructions to his teammates.
Ronaldo, driven by the hurt of losing out to Greece on home soil in the final 12 years ago, had made little secret of his desire to win a title with the national team.
Tears wiped away, he returned for the second half to stand by coach Santos and began to encourage his teammates as they faced a host nation determined to end its own quest for glory — having last won the European title in 2000.
Few predicted Portugual would reach the final, let alone win the tournament.
Read: Portugal stuns France in final
This is not a golden generation for “A Seleção das Quinas” — there is no Luis Figo, Paulo Sousa or Manuel Rui Costa — but there is talent.
In Renato Sanches, an 18-year-old midfielder who was named player of the tournament, it has a star in the making, while Ronaldo’s strike partner Nani and Real Madrid defender Pepe also enjoyed an excellent tournament.
But this was not about the individual — it was about the team.
It drew all three group games — against Iceland, Austria and Hungary — and only made it through to the knockout stage after finishing as the third of the four best third-placed sides.
In the last 16, Portugal needed extra-time to defeat Croatia in the 117th minute, and in the quarterfinals it beat Poland in penalty shootout after a 1-1 draw. 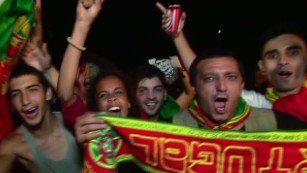 Portugal fans ecstatic after Euro 2016 win 02:42
The only contest it managed to win inside 90 minutes was the 2-0 victory over debutant Wales in the last four.
Ronaldo’s importance to the team on the field cannot be underestimated.
He has scored a national record 61 goals in 133 games overall, and in this tournament his double ensured Portugal came from behind to draw 3-3 with Hungary and reach the knockout stage, then he netted the opener against Wales and assisted Nani for the second.
But if anything, his departure in Sunday’s final at Stade de France gave his teammates an extra incentive.
“It was tough to lose our main man, the man who could at any moment score a goal,” Pepe said.
“We said we would win it for him and we managed to do that.” 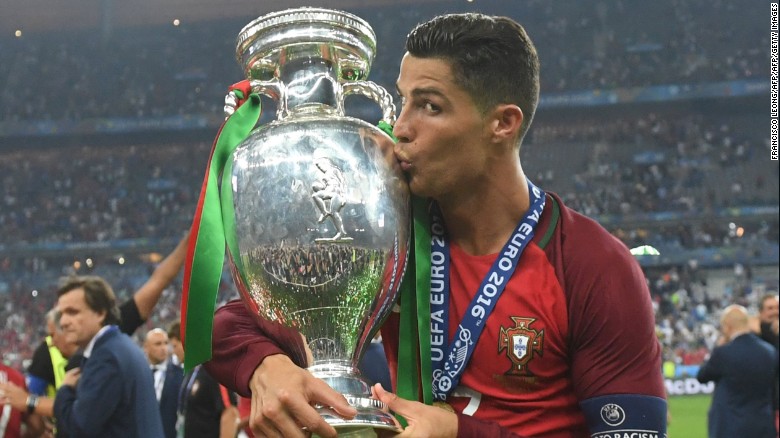 Ronaldo celebrates after Portugal’s historic victory.
When the 90 minutes finished and the players took a break ahead of extra-time, it was not Santos who roused the players but Ronaldo — a general barking orders to his soldiers on the battlefield.
Prowling along the touchline, he was gesticulating and pointing as Portugal’s threat grew in the additional 30 minutes. At one point, he even invoked the pointing at the watch move which his former manager and mentor Alex Ferguson made famous at Manchester United as the game ticked down towards it conclusion.
From a man who had been in tears an hour earlier, he appeared reinvigorated as he set about convincing his teammates they could win.
“Cristiano told me I would score the winning goal,” Portugal hero Eder, a 79th-minute substitute, said after the game.
“He gave me strength and positive energy. A lot of hard work went into it.
“With the injury to Ronaldo, we went through a tough time because he’s very important for us but he gave us all his courage and his strength.
“We were able to win it for him and all the Portuguese people.”
At full-time, Ronaldo, shirtless by this stage, celebrated before finding his top and leading his team onto the podium to lift the trophy.
He embraced Ferguson, watching on in the stadium as a proud father, while wearing a smile where there had been only misery hours earlier. 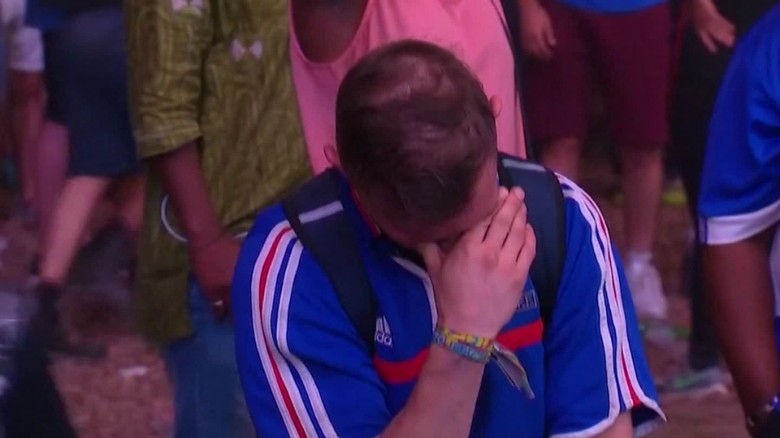 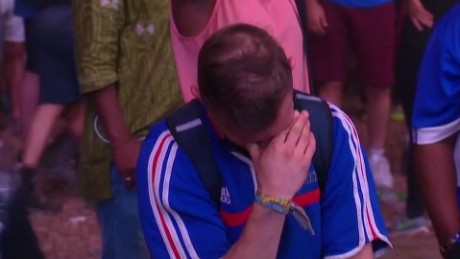 Camera catches touching moment when boy consoles fan 00:44
“I have been looking for this for a long time, since 2004,” Ronaldo told reporters.
“I asked God for another chance at this because we deserved it. Today I was unfortunate, I was injured but I always believed that these players, together with the strategy, would be strong enough to beat France.
“This is one of the happiest moments in my career. I always said I’d like to win something with Portugal.”
What awaits the three-time World Player of the Year now is unknown — but for all his achievements, and there are many — that night in Paris will take some beating.