Brexit: Next UK prime minister will be a woman, as Gove knocked out of race

London (CNN)Britain will be led by a woman prime minister through its complicated divorce with the European Union, after Conservative MPs voted the sole remaining male candidate out of the race to succeed David Cameron Thursday.

The contest to replace the outgoing Cameron as leader of the ruling Conservative Party — and of the country — will be fought between MPs Theresa May and Andrea Leadsom, after Michael Gove was eliminated in the second round of voting by their party’s MPs.
May secured 199 votes, Leadsom 84, while Gove won just 46, Graham Brady, chair of the Conservative Private Members’ Committee, announced.
The outcome means Britain is set to have its second female prime minister. Margaret Thatcher was the first, holding office from 1979 to 1990. 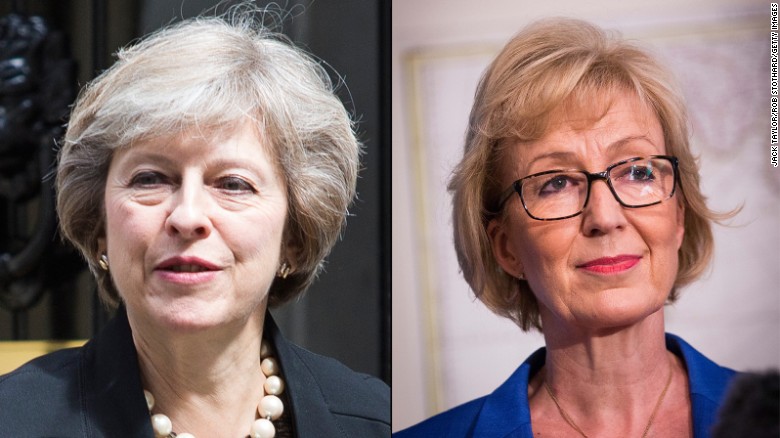 Conservative MPs Theresa May, left, and Andrea Leadsom will vie to be Britain’s next PM.

May: I will unite the party

May, Britain’s home secretary since 2010, told journalists outside Parliament that she was “delighted to have won so much support” from colleagues.
“I’ve won votes from Conservative MPs from across the party — from left to right, from leavers and remainers, MPs from the length and breadth of the country,” she said. 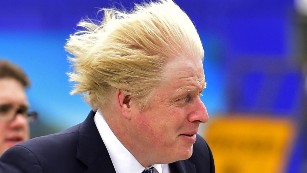 The Brexit saga in 90 seconds 01:47
“This vote shows that the Conservative Party can come together, and that under my leadership, it will.”
Conceding defeat, Gove told reporters he was “naturally disappointed,” but said there was one “important” and “welcome” outcome of the vote.
“Whoever the next prime minister of this country will be, it will be a female prime minister, and a female prime minister who has formidable skills. And I know whichever one of the two wins, they will lead this country well.”
The defeat is likely to be bitter for Gove, the education secretary, who, alongside fellow MP Boris Johnson was one of the leading campaigners for Britain to leave the EU.
Johnson, the previous favorite to succeed Cameron, campaigned closely with Gove in favor of the Brexit before the latter unexpectedly announced he would not support Johnson in the race and was launching his own bid for the leadership instead.

The race is on after Cameron announced his resignation following the June 23 EU referendum, having failed to convince the nation in his campaign that Britain would be better off staying in the union. He will step down in October.
An earlier vote between MPs of the ruling Conservative party on Tuesday saw two of five candidates out of the race — one was eliminated, another pulled out.
Now there are only two, with the 150,000 members of the Conservative Party set to choose between the remaining candidates, who will campaign for their votes over the summer.
Conservative Party officials have said that the winner will be announced by September 9, although there have been calls for the process to be sped up to help minimize the post-Brexit uncertainty.
Due to the structure of Britain’s parliamentary system, the winner will become prime minister, at least until another election is called.
So who is left? 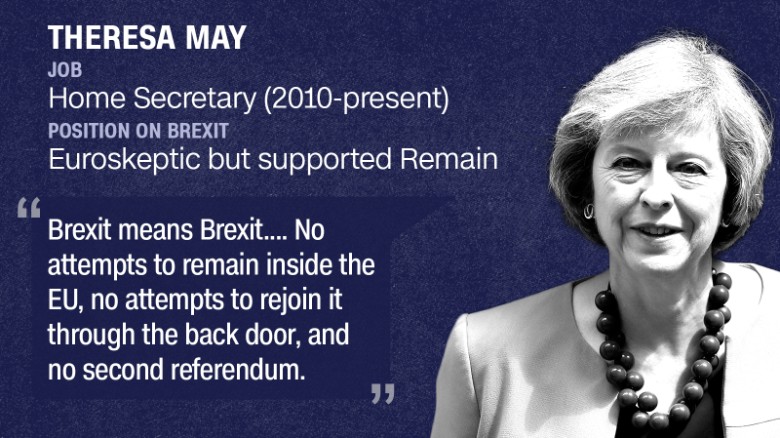 May, the favorite to succeed Cameron, has been described as “a safe pair of hands” to take the country through its negotiations with the European Union.
CNN political contributor Robin Oakley said May, who had reputation as a serious-minded workaholic, was “the nearest thing you could find in British politics today to Margaret Thatcher.”
One of the longest-serving home secretaries in British history, May backed remaining in the European Union, though she is known to hold Euroskeptic views and didn’t take a prominent role in the campaign.
Some have asked how a Remain supporter could possibly be the best candidate to hammer out an exit deal, but May has responded by saying Britain is looking for more than “a Brexit prime minister.”
May, an MP since 1997, has already said that no general election should take place before 2020, and she has been realistic about abandoning the target of eliminating Britain’s budget deficit before the end of the decade.
Veteran Conservative politician Ken Clarke was caught on camera in the British media describing May as a “bloody difficult woman,” though he appeared not to actually oppose her candidacy.
The 59-year-old has come in for criticism over her stance on whether EU migrants will be able to remain in Britain after a Brexit. While she has assured members of her party that she wants EU nationals to stay, she is refusing to make any promises before carrying out negotiations with the European Union.
May had also wanted the UK to leave the European Convention on Human Rights, but has now dropped the idea with Parliament unlikely to support it. 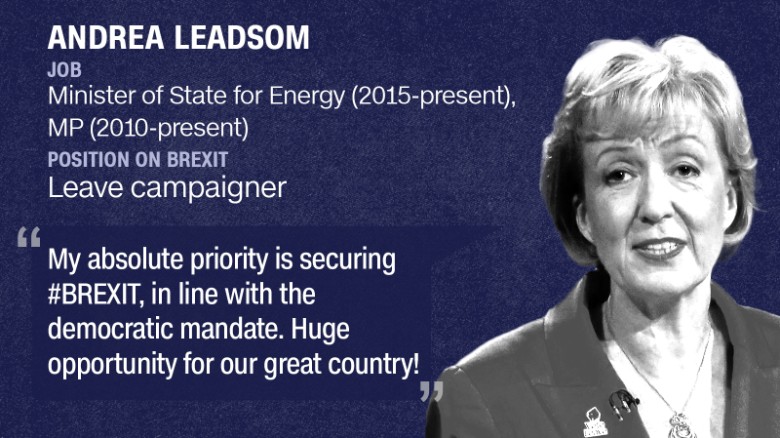 One of the surprise stars of the Brexit campaign, Andrea Leadsom, has come from nowhere to become a serious contender for the top job.
A fierce advocate of leaving the EU, the energy minister has already said she would quickly invoke Article 50, the action needed to officially begin the separation process from the European Union.
It marks quite a turnaround for Leadsom, 53, who warned it would be a “disaster” for the UK to leave the EU in a speech three years ago. She defended that stance, saying that she had been on a “journey” since and had changed her mind.
Leadsom set out her post-Brexit vision ahead of the vote in a speech that lacked conviction but was peppered with a strong sense of patriotism.
“I truly believe we can be the greatest nation on Earth,” she said, promising “prosperity,” not “austerity.”
Leadsom entered Parliament in 2010 following a career in the financial sector. She has also faced questions over her resumé, with critics claiming that it did not accurately reflect her professional experience in the financial world, according to CNN political contributor Oakley. Leadsom has rejected the criticisms.
Her critics — including her senior departmental colleague, Energy Secretary Amber Rudd — say that because Leadsom’s only been a minister for just over two years, she lacks the political experience for the top job.
But that hasn’t stopped her amassing a team of passionate supporters within the party, some of whom marched on Parliament ahead of the vote Thursday to show their support.